Sightseeing suggestions on this page 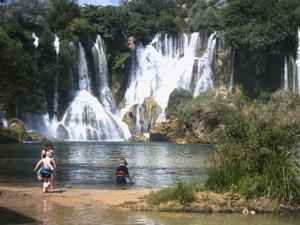 This place is fantastic. No matter what else you choose to do in your vacation, going here will be one of the most memorable trips. The water comes from an underground river so it is cold to say the least. It is also very clear making it an ideal place for children to fish with nets. It is also a very good place to swim.

If you cross the small lake, you may relax on the rocks underneath the waterfall before heading back. If you are a daredevil you can climb the cliffs on the far side and jump into the lake like the young locals do to impress each other. If you look at the picture, it might not seem like much of a jump. Even so, trust us: Most people will have second thoughts about even climbing up there - and much more so about actually leaping off the cliff.

If you go to Kravica in the middle of summer you are likely to experience that you drive up there in clear weather, you stay there while it's overcast and the sun bakes you in the car going back. Our (not very scientific) thoughts on the matter are as following: A lot of water particles are hurdled into the air by the drop from the river into the lake. The small particles then vaporize when they are exposed to the hot sun creating a local mist/ overcast.

There is a restaurant by the lake side sand beach. The Kravica Waterfalls are in Bosnia-Herzegovina so remember your passport. There is driving instruction for the trip in Apartment Tedo. Visit the Sightseeing and Activity pages for more information about Kravica Waterfalls. 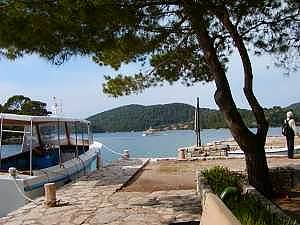 Mljet is special and even among the other beautiful island of Dalmatia it stands out because of its different geology and vegetation. Mljet is 37 km long and only an average of 3 km wide. Much of the island's mountains are covered by pine forest and between the mountain ranges, are fertile karst valleys.

There is a car ferry from Prapratno close to Ston to Sobra on Mljet. Check on Jadrolinija website for departure times. The crossing time is 45 minutes.
The one place you must visit on Mljet is the lakes in the western part. They are surrounded by pine forest, and a lovely environment where many people spend the whole day just walking around.

There are so many places worth a visit on Mljet that if you stay longer than a day or plan to come back you should buy a guide book. In the books are often mentioned the Cave of Odysseys. Legend has it that Calypso, the stunningly beautiful daughter of Poseidon, found Odysseys after a shipwreck, fell in love with him and kept him in sweet captivity in this cave for seven years.

Visit the Sightseeing and Activity pages for more information about Mljet. 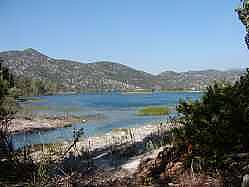 If your skin dries out from too much saltwater at the beach, you could opt for The Bacina Lakes thirty minutes drive to the north of Komarna. The six interlinked lakes are in spectacular view from the main coastal highway just north of The Neretva Delta.

The lakes are very popular with the locals during the weekends. If you go there, you should bring snorkeling gear and (if you have small children) fishing nets as well. It's not a coral reef but there are plenty of fish in there.

If you keep left when you turn of the main road you will pass a place where you can rent boats to take you out on the water.

Visit the Sightseeing and Activity pages for more information about Bacina Lakes.

The Norinska Tower and its Twin 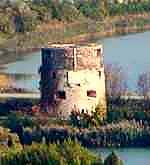 The tower by the road between Opuzen and Metkovic is all that's left of a (presumably massive) Turkish fortification from the early 16th century. The tower has a twin in a mountain pass inside Bosnia-Herzegovina.

We are trying to find out the name of 'The Twin', but it seems to have faded into oblivion. Very few people have heard of it and even fewer seen it. Nevertheless, it's there all right. If you take the inland road from Neum, you'll ascent into the rouged mountains of The Balkans, and you will eventually reach the fortress on your left-hand side. It might take you up to an hour depending on how fast you are willing to go. 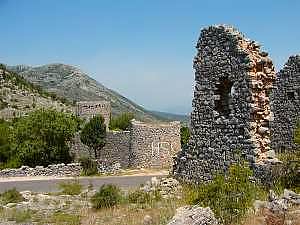 The Twin is on a plain, which is littered with rocks of all shapes and sizes. For some reason, there does not seem to be a whole lot of settlements up there so there haven't been people looting the place for building materials through the centuries. This is the fate; we imagine The Norinska Tower suffered. There aren't a lot of rocks in the delta where it lies but there are plenty of people who have all build houses from rocks. So: down it went.

The road leading up to The Twin isn't bad as Bosnian Mountain roads go. If you continue along the road, you will eventually hit the Metkovic- Mostar highway. Along the way, the passengers in the car can enjoy some of the most staggeringly beautiful scenery the region has to offer. These are the stuff postcards are made of. 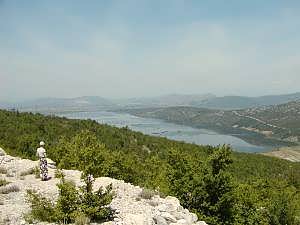 However, there is a catch: The driver should keep his eyes on the road! Unless he is used to driving in mountains or is willing to learn along the way this is NOT the road to follow. There are no crash fences, and the road is so narrow that you will have to put the car in reverse if you are so unlucky that you meet an oncoming truck (the truck driver won't do it. You can bet on that). The trip from Neum to the highway can easily take two and a half hours. This might not seem possible if you look at a map. However do keep in mind that distances are not really an indication of time, when you are in the mountains.


Visit the Sightseeing and Activity pages for more information about Kula Norinska and a trip to the other tower. 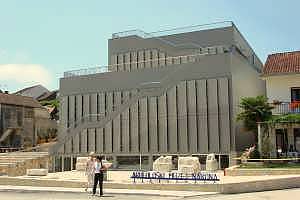 Narona is some 2500 years old. Alexander The Great's historian Theopompus mentioned Narona in the fourth-century BC. Back then it was one of the dozens of Greek settlements surrounding the north eastern part of the Mediterranean. The Roman Empire eventually promoted the town to the rank of a colony, and it was the administrative and military centre of the region.

It took the Romans many years to gain full use of the town. The important waterways were full of pirates, and it didn't really grow as a business centre until they were wiped out. A few hundred years later it was the towns own turn to be wiped out. In the middle of the seventh century AD an earthquake laid the town in ruins. 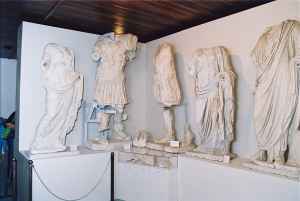 This was the beginning of the end for the town. It never regained its status, and it is believed that it was completely abandoned a hundred years later.

There are some excavation and restoration going on in the area, but it's very limited in comparison to the resources most other governments would set aside for the job.

You can see the remains of the walls that once surrounded the town and there is a museum on top of the Roman Forum. This is definitely not Rome, but it can make a nice trip if you are interested in these sorts of things. The museum houses the largest collection of Roman emperor statues found outside Rome. It is open weekdays except Monday from 1000 to 2000 Sunday it closes at 1300.

Visit the Sightseeing and Activity pages for more information about Narona.

See also: About archeological and architectural aspects of Narona. 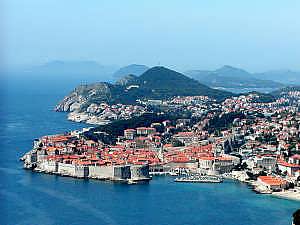 Allow yourself at least one excursion. Dubrovnik is known as The Pearl of The Adriatic and it is a United Nations UNESCO Heritage Site.
Check out this page before you go: Dubrovnik Harbour Cruise Ship Plan - choose the month and press "Prikaz izvjesca". Good days are marked in green, so-so days with yellow and stay away from the days that have red color.

The city walls encirceling the old town are quite something. You can easily get carried away to times long gone. When we were there in 2013 there was a film crew shooting for Game of Thrones.

Visit the Sightseeing and Activity pages for more information and links to some Dubrovnik pages. 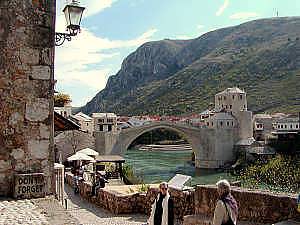 East meets west in Mostar. The town lies an easy 60 kilometer drive up the Neretva Valley. The must-see for all tourists is the Stari Most - The Old Bridge which was build by the Turks in the 16th century. Both sides of the bridge are always teeming with tourists taking pictures of the bridge and the mosques, looking at hookahs, copperware and oriental looking clothing in the many shops in the city centre.

Visit the Sightseeing and Activity pages for information about Mostar .


Go to top of page 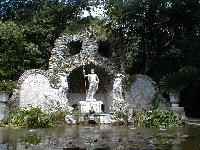 The botanical gardens at Trsteno north of Dubrovnik were founded in 1492. It has more than 300 species of trees and numerous plants from around The Mediterranean and the world. Together with the architecture from the Gothic-Renaissance period this makes The Trsteno Arboretum one of the finest gardens in this part of Europe.

Visit the Sightseeing and Activity pages for information about the garden .


Go to top of page 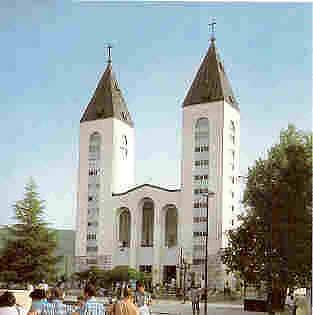 Medjugorje is in Bosnia-Herzegovina off the road between Metkovic and Mostar.

Since 1981 more than 20 million pilgrims have visited Medjugorje. It makes it one of the biggest Catholic pilgrim places along side Lourdes in France.

Visit the Sightseeing and Activity pages for information about Medjugorje.

Great fun and not so difficult. Instructors are available from April to November. 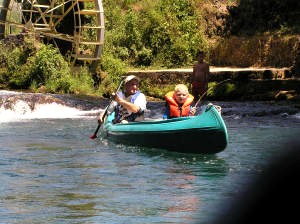 The Canoe safari starts in Bozjak near Studenci just after the Kravica waterfalls and ends at the meeting point in Struge near Capljina. The trip is 11 kilometres long and runs through stunningly beautiful karst landscape formed by the river over thousands of years.

The beginning of the trip is quiet and calm sailing and towards the end when the river runs a little faster it gets more exciting with a few small and fun cascades. It is easy and quite safe even for beginners. The canoes are stable and easy to handle.

Crystal clear water, waterfalls and birds will make sure that you will not easily forget this day.